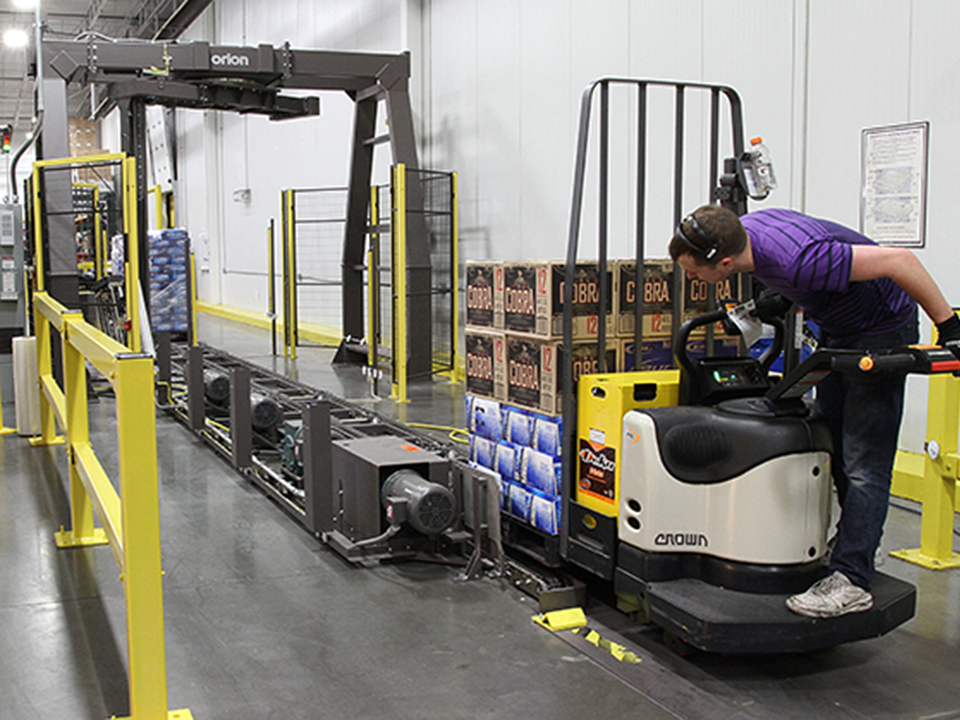 The food and beverage industries presents several tough challenges for pallet wrapping. In beverage applications, Orion machinery is most commonly used for empty PET bottles, or finished product in bottles and cans. In food plants, pallets of product in cases or bulk bags require unitizing. In some plants the product may be frozen or warm and requires special options to assure a well-wrapped and protected pallet load. Once pallet loads are neatly and securely wrapped, they may be sent to distribution facilities for repacking and reshipment. Orion machinery is widely used in distribution facilities as well as manufacturing operations.

In the manufacturing end of the industry, empty PET bottles must often be transported from their point of manufacturing to the filling facility. Empty PET bottle pallet loads must be stretch wrapped to 1) stabilize the load enough to prevent displacement during transportation, and 2) keep the bottles absolutely clean until they reach the filling location. Loads are often stacked very high on pallets and are considered very unstable loads until they are stretch wrapped. They also weigh very little, and thus can be damaged easily by stretch wrapping that is applied to tightly or has too much 'memory' which can damage the bottles (especially those at the corners) hours or even days after the initial wrapping. This combination of tall, light, easily damaged product combined with the need to apply a lightly tensioned 'dust cover' to the load requires specialized equipment to assure consistent and reliable wrapping of this difficult load type.

Orion powered conveyor is controlled by AC motors with VFD (variable frequency drive) allowing the speed of the conveyor rollers to start gradually and stop gradually. Known as "soft-start" and "soft-stop", this feature allows these unstable and extremely light loads to be transported to the machine gently so as to prevent bottles from falling off the load as it rides the conveyor.

Orion's MA rotary tower models rotate the film around the stationary load, thus the load does not need to move while being wrapped. The initial wraps can be done at slow speed to apply a 'stabilizing' wrap, and once applied, the machine ramps up to production speed. Orion rotary tower machines are available in three basic models, each providing just the right combination of features, options and speeds to meet the exact requirements of the customer.

An optional top sheet dispenser offers an automated way to lay a sheet of plastic on the top of the load prior to being wrapped or as part of the wrapping cycle. The top sheet provides a positive barrier against contamination.

The Insta-Thread film delivery system uses a motor to effectively pre-stretch the film prior to being applied to the load. In cases where the load is extremely fragile and light, as with empty PET bottles, the film carriage can be ordered with a lower than normal prestretch percentage (normal is 260%). This lower film prestretch rate (often using a lighter gauge film), combined with the accurate proximity film tension sensing system, gives customers the ability to apply the film with very little force, thus depending on the film's memory to provide the snug holding power needed to stabilize the load, yet not so tight as to cause product damage.

Pallet loads of beverage product can be short or tall, heavy or light, made from bottles, cans or pouches but one thing they all have in common is that they are liquid and spillage can cause big messes and shut down an entire production line. That's why Orion equipment is engineered and built for maximum reliability and uptime. Starting with the structure of the system, Orion uses only structural steel tubing and steel plate to assure a robust platform that will perform reliably for many years in even the most rugged environments.

Every Orion automatic system is equipped with the proven Insta-Thread film delivery system which maximizes stretch film stretch and strength properties while using the least amount of stretch film. The combination of 260% powered prestretch, specially textured high-density film rollers and an extremely sensitive film force feedback system means that the film's force is distributed evenly around the entire load with film tension at the corners the same as in the load center.

Orion has been serving the food and beverage industries for over 30 years. No two applications are the same which is why Orion offers a multitude of models, options and configurations to match the exact needs of the application.

In today's modern food and beverage distribution facilities, efficiency is paramount. Large amounts of product must be picked, loaded and delivered as quickly as possible to insure a profitable organization. The stretch wrapper plays a large role in this aspect. The faster the wrapper can be loaded, and loads wrapped, the faster those loads can be processed and delivered.

In recent years Orion has developed an exclusive conveyor system, the LoPro, designed specifically for the fast-paced food and beverage distribution facilities. The LoPro is a heavy duty, low profile 'drag chain' type conveyor that can be loaded via forklift or electric walkie. A specially designed entry area allows for loading of up to 3 loads at a time increasing efficiency dramatically. The machine's logic then moves the loads as a group, then individually, in to the wrap zone for stretch wrapping. Several customers have integrated an automatic weigh scale and label printer/applicator in to the system to save even more time.

The food and beverage industries represent one of Orion's biggest markets and over the years, Orion has helped thousands of customer solve the toughest packaging challenges with tough, reliable stretch packaging equipment. With a nationwide network of factory authorized distributor locations, and the power of ProMach behind us, Orion is your best choice for your stretch packaging needs.