Vertical pallet load movement during shipping was resulting in high levels of product damage. A unique stretch film banding system from Orion stabilized the loads and vastly reduced product damage due to vibration.

Driscoll’s® is the world’s premier distributor of fresh berries. From its packaging facilities in California and Mexico, it trucks pallet loads of its strawberries, blueberries, raspberries and blackberries to distribution centers across North America. Berries traveling the farthest, to its East coast customers, spend days on the road in refrigerated semi-trailers.

After trying different solutions, then shipping test loads across the country, Driscoll’s worked with Orion Packaging Systems and Associated Packaging to develop the solution that both protects its berries and meets the demands of its production cycle, which produces 60 pallet loads of berries every hour. That solution is an Orion FA turntable automatic stretch wrapping system that bands the stretch film and applies it in a pattern that creates the needed downward holding pressure without completely sealing the load. Banding leaves open space that allows the modified atmosphere to circulate throughout the load. The Orion solution met Driscoll’s load-per-minute productivity, saved labor by being on in-line automated process and was one-third of the cost of the taping solution Driscoll’s had originally used.

It is critical to Driscoll’s success that its berries arrive fresh and undamaged. To maintain freshness, full pallet loads are sealed in a patented protective plastic hood, creating a modified atmosphere that displaces oxygen and slows fruit respiration, helping to preserve freshness. What the company found, however, was that while the modified atmosphere maintained the fruit’s freshness even on the longest trips, in many instances the top two or three layers of trays in pallet loads arrived with damaged fruit—this was especially true of raspberries which, being hollow, are most susceptible to physical damage.

That damage was the result of vibration resonance in the pallet load during the trip. The motion of the trailer over the road surface caused this resonance, which increased as it rose to the top of the load, where the distance from the pallet maximized the vibration effect on the trays.

“Over the trip of 2,000-4,000 miles, depending on the destination,” says Tom Huffman, Driscoll’s Regional Operations Manager, “many of the raspberries in the top two tray layers would be reduced almost to jelly.”

This consistent damage led to claims by the receiving companies, representing a significant loss to Driscoll’s in addition to the damage to its brand image. It was determined to find a solution that would eliminate the results of this resonance and deliver all of Driscoll’s berries undamaged.

That solution reduced the product damage somewhat, and applied the tape in a pattern that left open space for air to circulate. But the taping equipment operated off-line. Pallets were moved onto and off the system turntable by forklifts, and as a result the operation was only able to tape one pallet every two to three minutes, which meant that it could not match Driscoll’s 60 pallets per hour production.

As a result, the company had to prioritize the loads that would be taped, and it decided to use the technique only on the delicate raspberries. It was successful, in that shipments taped in this way arrived undamaged. However, once they saw the beneficial results, both Driscoll’s many customers and its sales force wanted every load to be secured in this way. That would not be possible given the speed of the taping.

The Next Step: Improve the Process

“In the spring of 2009,” says Huffman, “we began exploring other, higher speed solutions available, with three goals in mind: to increase the hold-down of the pallet load, to reduce the material cost associated with the taping system, and to increase throughput to match the productivity of the line, allowing all loads to be secured.”

He investigated various systems online and at trade shows until he settled on the Orion solution. Orion and its local distributor Associated Packaging, Inc., thereafter worked closely with Huffman and the Driscoll’s distribution team to refine the system, automate the production line and ship test loads across the country until they reached a solution that met all of Driscoll’s needs.

After examining all aspects of the Driscoll’s challenge, including the hold down requirement and high rate of production, Orion developed a system that enabled its FA automated pallet wrapping system to replicate what the wrapping tape was doing but improve the characteristics of the pallet load by “banding” the stretch film.

On its automated wrapping system, as the stretch film is being applied, it is passed between rollers that narrow the width of the film, creating a strong band while preserving the strong elastic character of the film. This band produces a strong holding effect without completely sealing the pallet load (as Driscoll’s required), and can be applied automatically with the same speed as a full high-speed pallet wrap.

Given the height of Driscoll’s typical pallet load (80-108 inches), Orion engineers modified the film carriage on the FA by developing a servo drive that allowed the carriage to move more quickly up and down the mast. This allows the wrapper to deliver the X-shaped open wrapping pattern on the large load while maintaining the turntable speed that meets Driscoll’s production requirement.

“To help Orion engineers develop the modified system,” says Huffman, “we shipped pallets of berries to Orion in Alexandria, Minnesota. The shipment included electronic sensors in the berry trays that we use to measure shock and vibration in our loads.”

In Alexandria, Orion re-wrapped the pallets with the new configuration and drove the trucks around the local area to test the result. Printouts from the in-load sensors showed a significant reduction of vibration.

The development of the system continued, as did testing, even after the first wrapping system was purchased and installed, and modifications were made as necessary. For example, because the banded film applies such a strong downward force, in early applications that force crushed the corners of the trays of berries at the bottom of a load. Orion engineers further modified the wrapper by incorporating a special clutch into the film carriage that adjusts the film tension as the wrap reaches the lowest level of the pallet.

In addition, Orion designed the wrap to end with the tails of the bands being captured by pneumatic rods, then cut so they are trapped under previous bands to prevent the pallet wrap unraveling during transportation.

Another adjustment made with the benefit of experience was in the gauge of the wrapping film. Orion and Associated Packaging began by recommending 80-gauge film, but Driscoll’s subsequently found that lighter gauges worked just as effectively and reduced film cost. It is currently using 60-gauge film in its operations, which further reduces its pallet wrapping costs.

The Orion FA automatic turntable pallet wrapper is fully automatic and could therefore be installed directly into Driscoll’s production line, where pallets are automatically rolled onto the turntable, wrapped and rolled off, eliminating the time and labor needed to move them by forklift. Using two 10-inch rolls of film, the wrapper applies two bands of film simultaneously to pallet loads as they revolve on the turntable, completing the wrap in about 60 seconds.

The wrap unitizes the entire pallet load, but does not tie it to the pallet because, when the pallet passes into the machine where the modified atmosphere is introduced, the load is lifted from the pallet as a film hood and bottom sheet are applied and sealed before flushing. Following this operation, pallets are moved to loading docks, ready for shipping.

The entire development process, including research, design, testing and modifications took approximately four years. Over the course of that time, the original system that Orion installed became the prototype for what amounted to a custom-designed pallet-wrapping system for Driscoll’s. That system met all of Driscoll’s requirements.

“This system is the result of a truly close partnership of Driscoll’s, Orion and Associated Packaging,” says Driscoll’s Huffman. “Without complete cooperation from all parties, it never would have been successful.”

Currently, two Orion wrapping systems have been installed by Associated Packaging’s Technical Services Team and are operating at Driscoll’s Watsonville, California facility, and one each in its Santa Maria and Salinas facilities. Future installations are planned both for other California locations and for its Mexican blueberry operations. 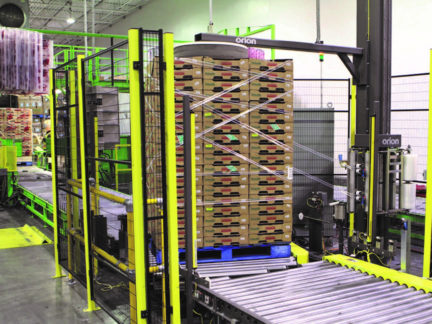 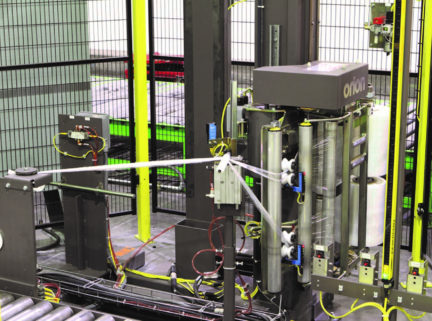 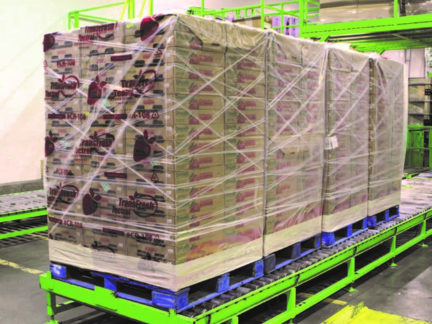